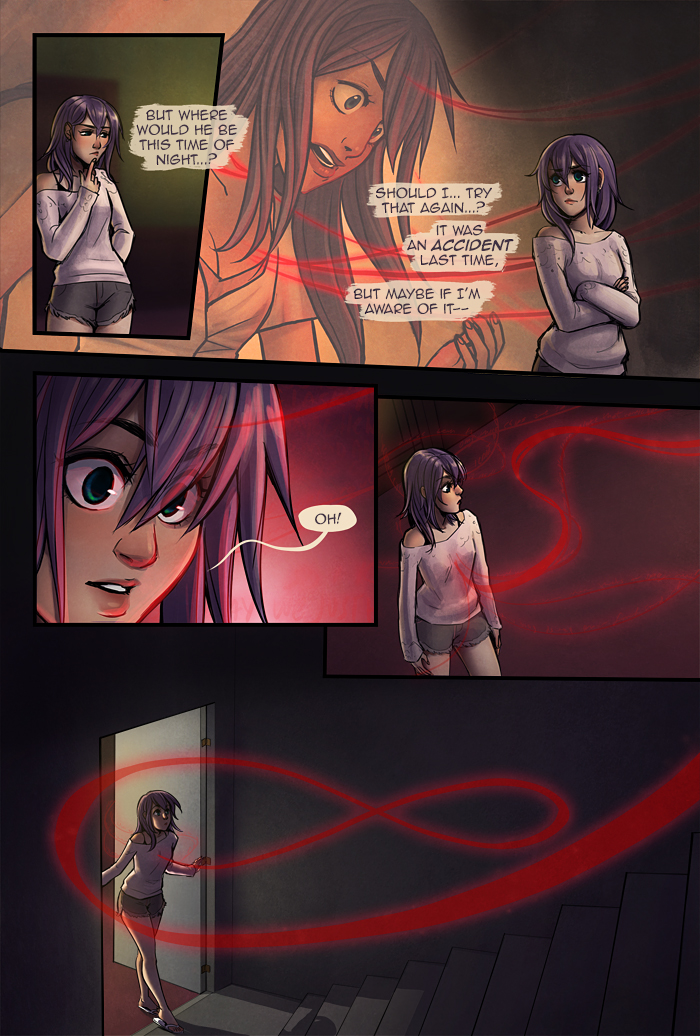 look, it's the red shit again! hope no one dies today 8D

i'd like to point out that this scene was actually supposed to include her once again having trouble using the ability [like, having trouble focusing with the onslaught of emotions] but i trimmed it out because of my crappy update speed ._. if ever i print d*s, i'll add that back in... //mumbles something that sounds like 'pipe dreams at this point' while kicking at the dirt//

also... this page has been done for over a week, and really would have been done much, much sooner [new colouring method is super quick], but i've been pretty busy with life lol.

highlights of my past month and a half:
- applying to schools for izzie. //buries face in hands// my baby...she is grow ;0;
- we had a pregnancy scare recently. that was...an adventure. suffice to say, i was distracted by this and didn't get much done. [for the record, it was a false alarm, but there was about a week and a half where we were really worried about it lol]
- there's also this whole thing with this dam in california that is threatning to flood our river; again...surprise, i haven't done much with this going on...
- ...which is fine in the end, because my wrist decided in the past couple weeks to have another a flare up out of nowhere anyway. i can't even draw on paper without it bugging me after a couple minutes. not as bad as the one that messed with me for months on end before but i can't say how long it'll be. i need to have it checked out again :T ^ tho to be fair, most of the stuff i mentioned above has mostly distracted me from app season too ajsdhfjsd it's been a month, y'all lol. but yea there's a few days left to apply! //sweat// so have at it...sorry i'm late lmao.

anyway i don't know when the next update will be. i'll try to keep you posted about my wrist status on fb and tumblr[under the dream*scar tag]... i don't get a chance to log onto the desktop often [and it takes like 5+ mins to boot up], so i won't be updating the news here. as always, thanks for being patient, and i'm sorry lol.

[not updating this anymore, i don't have the password :T feel free to vote anyway if u really want]
Various wips from my sketchbook of Vix and her Twin [but strangely none of them together xD]