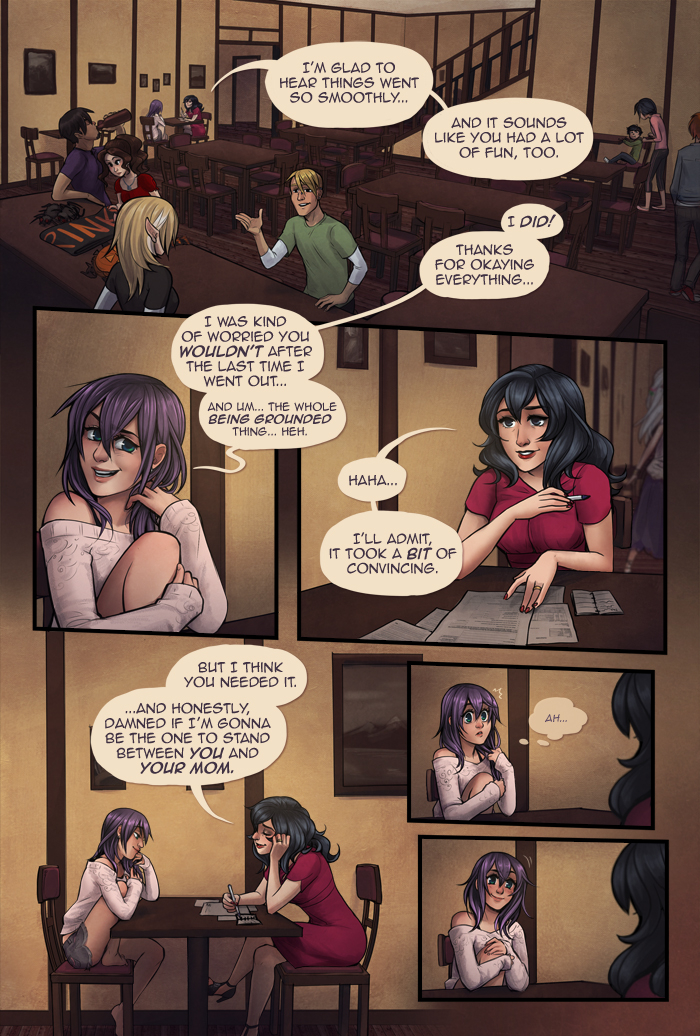 For the record, Vix is getting the warm fuzzies cos Arianna referred to Julie as Vix's mom lol. I find this both really sweet of Anna, but also really really depressing, cos I know she really regrets not raising her xD;;;

Also this is the page that killed me. Like it doesn't look like much, but panel one guys...uuuuuugh. It took so long to ink lol. Also for those who made it to the stream for this, let's point and laugh at the pants guy -- boy, we know your secret.

Sorry for the long delay between updates. Surprisingly it's not actually Ladybug this time. it's actually mostly Izzie xD;; she's so demanding. Josh got me a Surface Pro to try and make it so I can draw more away from the desktop [like when i take her to the park or her bath times] but it's still not really set up [and i am finding i can't ink on it at all, even after calibrating it...maybe i am doing something wrong??? but it's really inaccurate D:] so it hasn't helped a whole lot yet xD I've mostly been colouring with it...which is ok but I kind of ran out of inked pages soooo I haven't made much progress in over a week XD;;;

I started trying to dial back my obsessive nature on this page to colour it less like .... perfectionisty... I think I succeeded more on the next page with reining myself in tho haha [and more so on the surface pro coloured page following it, which i am working on currently]. So the quality of the colouring might seem to start dropping from here on out, in an attempt to get pages done faster with what little free time I find myself with now xD

All that said, I was gonna wait til tonight to post this [cos the comic is supposed to update TUESDAYS or Fridays...not mondays...lol] but I am not sure when I will be back at the comp again [//side eyes isabel] sooo...here. Early Monday update xD

Anyway, yea... just keep your eyes on facebook or tumblr if you are ever wondering on the status of an update.

Also, for the record, I made the monthly sketch request threads for April on patreon, so jump on it if you are a patron!

requested sketch from patreon from last month that turned into a comic... prompt was "zeke arm wrestling arliss or jo" ...something like that. somehow it uhhh...went directly the opposite way i intended and this happened?