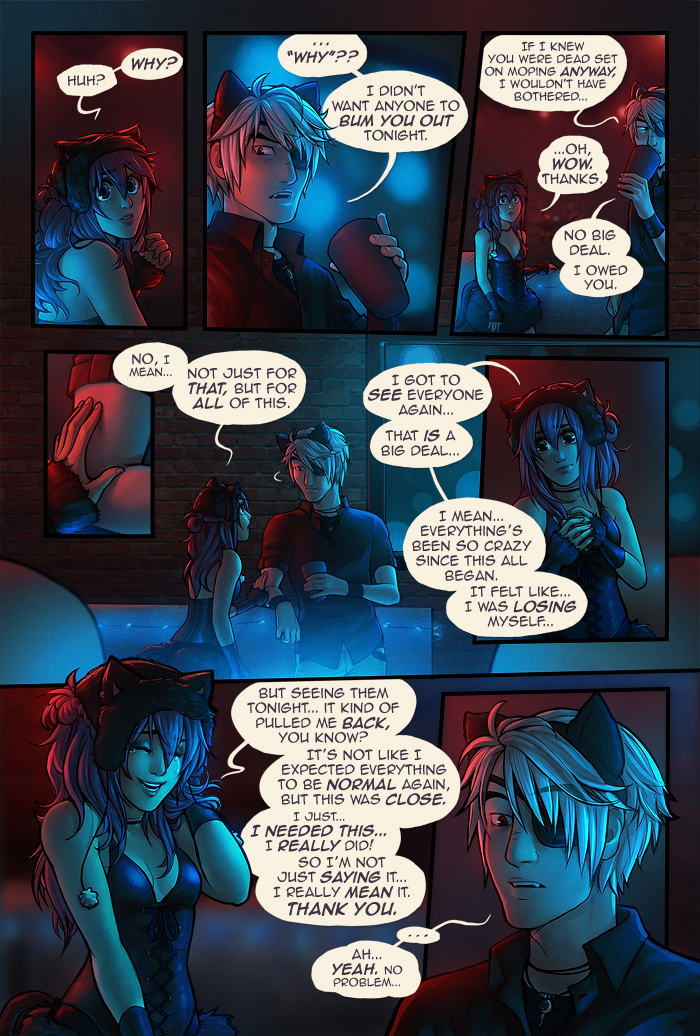 The person who posted dream*scar on Webtoons is also posting it on Tapastic. I'm linking to them this time because, honestly, this is messed up, and I figure as many reports as possible on this will help get it taken care of.

For the record, if you happen to see my comic ANYWHERE ELSE ON THE WEB aside from this website or the now defunct mirror site on drunk duck, IT IS NOT ME. Report it and let me know so I can make an official complaint/DMCA take down.

Thanks to Yasha and Thorbjorn in my comments section for pointing me to these sites. Y'all are awesome :C And thanks to everyone else for your support ;0;

To the person doing this:
Whoever you are, just stop. This is not cool. I was quietly upset about the first one, but this one too? Both sites that offer ways to monetize my hard work? That's gross. Stop it. Don't be gross, okay?

LOL KOU WHO ARE YOU TO JUDGE GRUMPINESS THO. But really tho, I am pretty sure he wasn't expecting this kinda reaction from her lol...

One more page in this chapter, which is gonna wrap up Vol 2...wowza XD I'll prolly ramble more about this next page.

(edit: bawww i forgot to put the music swirlies in this page...ah well.)

SOOOO last week, a reader posted a comment asking about me/d*s being on webtoons, and if it was legit or not. I don't know if you ever saw my reply to you, but NOPE, THAT WASN'T ME. It was some random person pretending to be me and trying to win money, I guess...???? Cos it was in one of their league challenges, and those lead to paid positions on webtoons [it was doing pretty well for only having 1.5 chapters up XDD] But yeah, as we speak, it's still in a pending deletion status while they wait on the poster to reply to their inquiry. I doubt they will reply...like what could they even say e_e;;; I have so much proof it's my creation that it's not even funny.

So yeah, if uhh...anyone has ever wondered if I'm okay with you taking my shit and pretending to be me/trying to make money off my stuff... I'm not xD;;; Like... wtf guy/gal. 8( I was actually kind of amused/shrugging it off til I saw they were trying to make money off it ._.;; like, it still would have been not okay [not to mention creepy, since they were responding to ppl as if they were me lol], but I wouldn't have been mad about it, cos it's happened before lol... i usually solve it quietly cos it's just kids that don't know better. But this was really messed up 8(

In usual Hchano fashion, tho, I am looking at this in a positive light. It made me think maybe I should open a mirror somewhere to reach new readers, cos there were a few new readers in there! I'm thinking either SmackJeeves or Tapastic, but I'm not sure what people like better... personally I think I like the way SJ looks more than Tapa, cos...the scrolling thing on Tapa...it's kind of annoying... and reading it on mobile is awful, cos the ads keep moving the pages around.

^ THIS IS A THING STILL and I swear I will replace the store button with a patreon button soon XD Thank you again to everyone who is helping out so far ;0; Please know that I do a little dance anytime I see a new pledge pop up XD

----
And here's batch of new comics we accepted this season! The theme this week is SCI FI. I'm following all three of these, just haven't added them to my links page... T__T;; //lazy

RetroBlade -- After a 'reality crash', Axel Kepler, the last known survivor, travels back in time, trying to figure out what where things went wrong.
The Demon Archives: Minerva -- As humanity struggles to rebuild civilization after the third world war, a soldier and his AI fight against demons both internal and external. [straight up stealing thane's desc lmao...]
The Ferrin -- Follows a young researcher named Elanore as she researches a species only found on a protected planet, far from her home. While she immediately bonds with the animals in captivity, her skill is tested when an incident forces her into the wilds, where the wildlife is not quite as friendly... [my desc is bad but this comic is really good, dammit]

Some doodles of charas that are coming into the comic in Vol 3...excuse the stitched together cellphone pics lol. >_> also i was doodling these without a pencil sketch so they are kinda sloppy....and I'm rusty with these two since I haven't drawn them in a very long time xD [edit: i just realized i accidently cut off the Dana's Lips doodles...oh well lol]