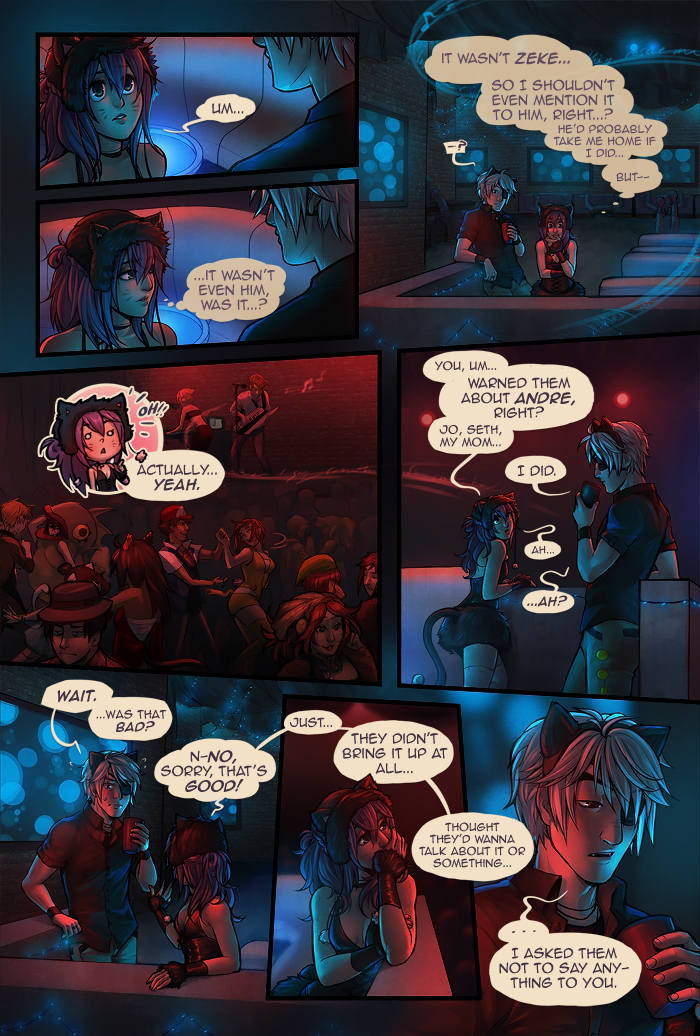 Tuesday Update?! BLACK IS WHITE UP IS DOWN THE WORLD IS ENDINGGGGGG

But no really, since I was so close to done with the page, I thought I'd finish it up so I could post it today! Trying out a Tueday OR Friday update schedule now, depending on the closest update day that I finish a page :D Sound good to you guys?

//screaming I DID THE THING...after a lot of nagging for like over a year now from art buddies, I started up a Patreon ;0; I'm still working on ideas for better tiers, but I have the basics up right now. Feel free to suggest some stuff. I have a little list I am making. Mostly things I think won't take much time away from working on the comic...

Anyway, Patreon is totally optional and up to you, and it won't change anything around the main site really, so don't worry if you can't chip in :D but I do beg that if you can't help out that way, please consider helping out by spreading the word about my comic! Word of mouth is really the main way I get new readers ;0; doing ad stuff is extremly time consuming, and I'd rather be drawing when I have my limited computer time lol xD;;

Anyway, thank you for reading ;0;!

CAMEOS on this page:
Daniel from... uh. Well... Daniel XD
Katsumi and Karra from Bedlam Genesis
Leawyn from Stargazer's Gate

And here's batch of new comics we accepted this season!
Xylobone Tomes -- a creepy-cute adventure comic of a skeleton necromancer and his tiny mandragora sidekick. Really fun witty little comic. I really enjoyed this one ;0;
Random Battles -- Random Battles is about a new family finding their place amidst the magical girls, robots and the bizarre inhabitants of their new home on the Bebop Isles! The art is really fun and the story is just starting to take off! Worth jumping into now~
Witchery Etc. -- A sweet story about a headstrong young witch named Hazel who befriends a headless man named Jack. The art is really adorable, and I enjoyed what I got to read [but i was reading from my phone, and tumblr haaaates my phone T_T]

Emma, who does The Sundown Boys, started a cute little comic strip called Really, Tillie? The charas are adorable so I had to doodle them xD