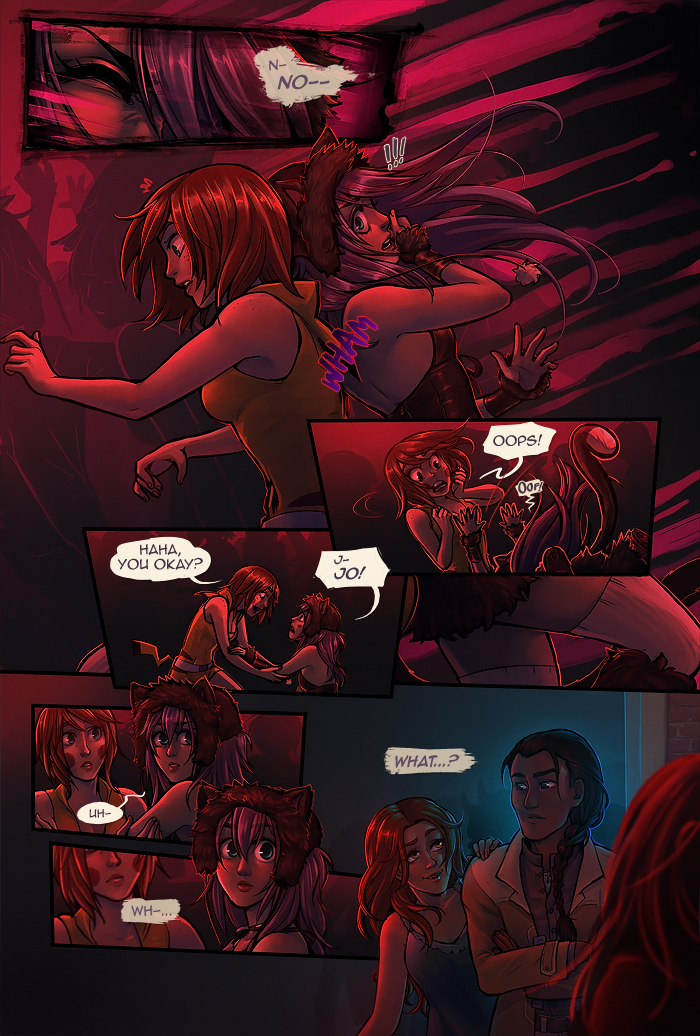 So who's the lady and that handsome devil there? It's a cameo of Miranda and Cabal from Only Half...there's been a running joke between us for years concerning Cabal and Zeke, so I figured this was a good place to drop his cameo xD [cabe was also in the bg in chapter 7...]

I've gotten some fanart during the hiatus but I will share that next update, this post is probably already going to be pretty long :'D

So yea, let's talk about that hiatus...
For anyone who only checks when their RSS is like, 'YO, UPDATES!' I've been gone for a while. My wrist issues became much worse in Feb, and I had to take a break. It was to the point where just being awake was painful. It was a dark few months there lol. Turned out it was nerve damage! Who knew!

Obviously I'm doing better. I'm on some medication that's helped a lot, and I'm not drawing as much as I was before to avoid making it worse. In any case, I'm just so happy to be back, you guys don't even know. @[email protected];;;


WHAT'S THIS MEAN FOR D*S?
I have no plans to stop updating, but I might not update every Friday anymore.
//ducksthrownstuff xD
It sucks, I know. Once a week was already pretty damn slow, but you do what you gotta xD My plan is to update any Friday after I've finished a page, tho. I'm imagining right now that might be anywhere from one page a week to one page every 2 weeks. I'm sure I will have good weeks and bad weeks... we'll see how it goes from here.

I'm planning to use the quicker colouring method I used on these club pages when the scene is over. I'm actually not sure how great it'll look, but I'll try to make the transition as smooth as possible xD; I don't think anyone will complain tho... y'all have been beautiful through all this ;n; Thank you so much for sticking around ;_;

Spiderforest is open for applications now through August 22! Do you have a webcomic? Do you want to be a part of a nice and helpful community? Perhaps enjoy some joint exposure for your comic? Any of that? ALL OF THAT?? Then go have a look around SF and think about applying! If any of you have any questions at all, please let me know~ c:

I spent yesterday [and actually most of this week so far XD;;] reading webcomics that applied at SF, and took breaks to doodle random cute stuff [cept the rylie doodle...that one is sad lol]. These are messy but I actually hadn't planned up posting a vote bait this week til I did this anyway so...enjoy xD;?!