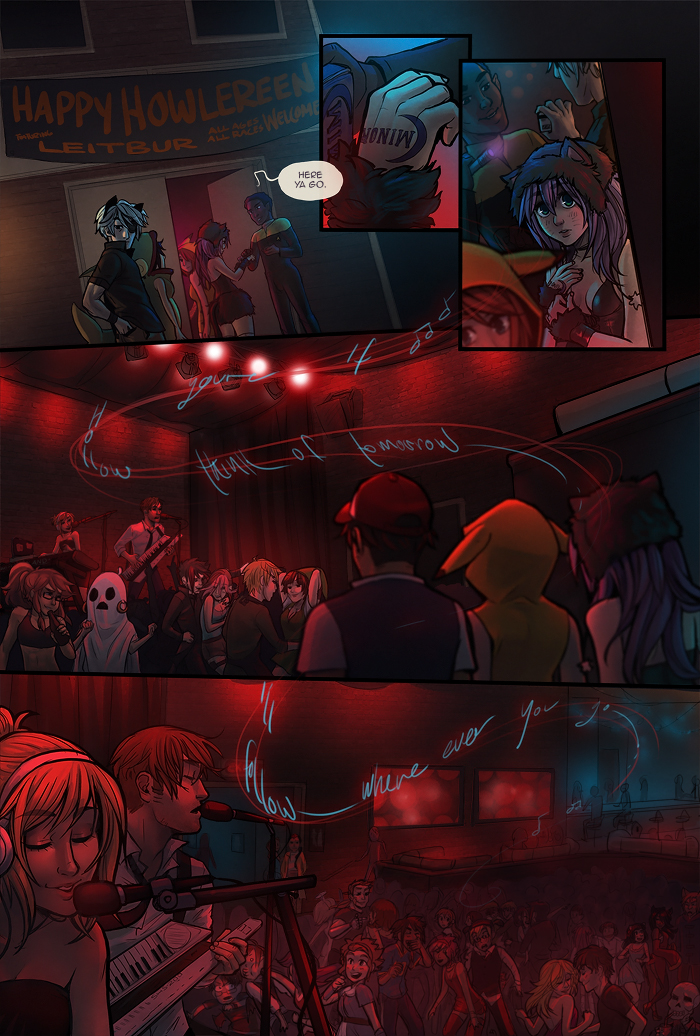 This page actually woulda been a looot later, but I did a new/quicker colouring method on it that I learned from Matt, and it really sped the page up. Thankfully the scene change kinda masks the change in methods, and it came out rather well :D Hoping the next page won't take as long, it's not as crowd heavy...

[also lemme apologize this page is really um...like not much happening, and yet it took so long to do x_x;;; sorry...ahha]

ANYWAYYYY, there are cameos allll over this page! First and foremost, I really need to thank Leitbur for allowing me to use their likeness and music on this page! Their stuff really caters to my love of 80's pop music and kinda marries it with a modern sounnndd. It's so dreamy! The song used on this page is Think Of Tomorrow.

I highly recommend checking out more of their stuff! My faves right now from them are:
Counterpart
Heartsink
When The Lights Go
You And I Could Rule The World
and of course the one this chapter is named after:
I Will Always Be Your Constant

They also do some really great remixes [been listening to this one a lot lately, and Final Fantasy 6 one]... I should probably stop linking stuff now tho, or I might just link everything they've made e_e;; They're releasing a new EP soon that I am p excited about so...expect me to plug that when it comes out too ahhaha...I'll prolly still be on this scene anyway sigh :|


ANYWAY, the other cameos on this page:
Lave from DDWG
Bean [sorta lmfao] from Lapse
Leon & Adrienne from The Sundown Boys
Rodney from LaSalle's Legacy
The main trio+Tenge from Sombulus
Garret, Sagira, Cabal & Miranda from TOHS
Ashley & Seth from Altar Girl
Kats, Karra & Kevin from Bedlam Genesis
Trent, Tristen & Karasu from my HIME & LiR stories
Donovan, Billie, Mirah and Demitry from an old RP [for which i created arliss~!!] with a buncha buddies back in the early 2000's~


WHEW think I got everyone xD //wipes brow

i'mma be pimpin this til it's over guys

[this is my child btw lol]