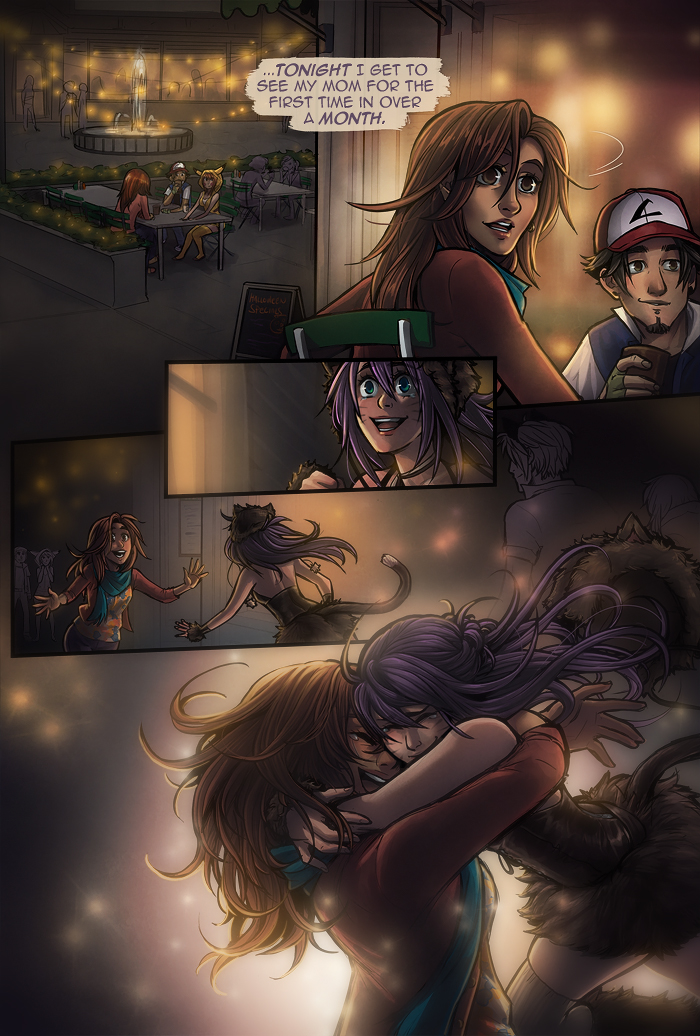 Oh yeah these guys still exist. I guess there actually was a reason for the Ash/Pikachu cameo last page... but Julie, did you even try? You're as bad as Kou 8(

Ugh tho guys I am such a mama's girl, this page made me tear up more than once while working on it uuugh ughhh xD; //long distances hugs @ own mama

[also i'd like to point out that 'over a month' = nearly 2 months. GUYS IT'S ONLY BEEN ABOUT 2 MONTHS IN-STORY AND IT'S TAKEN OVER 5 YEARS TO DO THAT MUCH lawd help me]

Chirault is about a young girl named Teeko, who gets shrunken to teacup size by a wayward spell. Luckily, the demon hunter Kiran is nearby when this occurs and Teeko sort of guilts him into helping her out haha. The two set off on a journey together, in search of a mage to cure her, but in the process get dragged into a mess that the mage guild is trying to cover up...

Chirault is a great webcomic, drawn traditionally, which I think is pretty rare in the webcomics world, and it looks so fackin' cool you guys omgawd. Teeko and Kiran are so cute together [innnn a platonic way, teeko is a kid lol] and the story has been getting really exciting lately @[email protected] Also, the comic updates 3 times a week cos Thane isn't human.

Aaand for the record, the Kickstarter for Chirault is also still going! She's already reached all her current stretch goals so there are a lot of goodies to be included with the book xD I am so excited, y'all, omg. 8D

I didn't really get a chance to draw anything other than d*s this week, but here's the start of a draw-this-pic-again thing that I did last week. It's not very far along, but I am basing it on one of my oldest "wow what was i thinking" arts from 2002... which you can view over here if you wanna laugh at some old art. I'm trying to keep it pretty close to the original pose...even tho it's ridiculous xD[note: it's pre-dream*scar, back when vix and kou were classic style vampires, so it's a non-canon scenario haha]