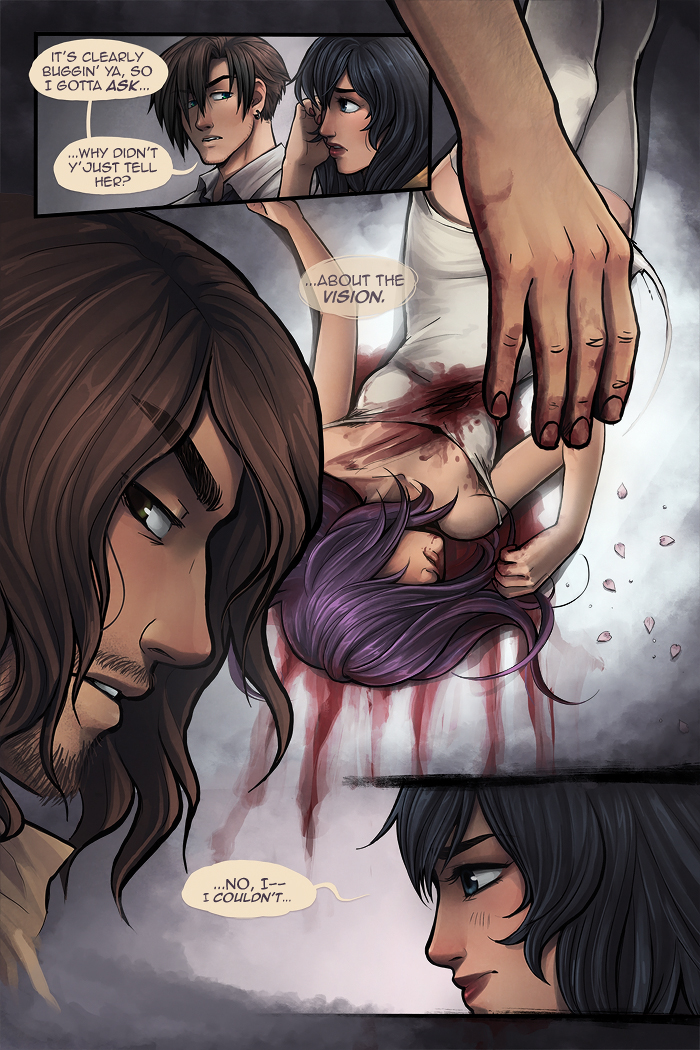 AND VIX IS ALREADY DEAD

Washington was pretty neat! Wedding was awesome. Here, have a pic from the graffiti wall we did.


ANYWAY. Next page is the last for this chapter! And then I plan to take a break...not sure exactly how long. But enough to give me a chance to finally work on the vol1 print [chapters 1-6] and to finish up my artwork for the demon anthology book. I am thinking it won't be longer than a month, cos the deadline is in Sept haha...but um, yeah. I'll talk more about this next update.

Altar Girl
Ashley Altars has a major crush on Adam Evenine, one of the most popular boys in school. She also unwittingly holds one of the two keys to Heaven and Earth! The owner of the other key is a guy named Seth Charming, who has been dead since the late 1920s, but has been brought back to life by the heavenly "Gemini Twins" Sera & Cherry. Life is tough for the Altar Girl.

From the Machine
A runaway supersoldier and a lady bard go on adventures with a snarky pilot; a weird guy who talks to trees finds a lost kid on a battlefield and ends up taking care of him. On their journeys they encounter assassins, toxic forests, draconic airships, and a search for a mythical land.

Moonslayer
When Syrma discovers that she is the victim of a curse that will end her life, she intends to change her fate. For this she must destroy the goddess who condemned her -- and time is running out.

Soul to Call
The Fall devastated earth, leaving the ruins infested by abominations and the occult. Surrounded by danger and insanity, there's only two things on a young courier's mind: family, and survival.

Star Cross'd Destiny
Star Cross'd Destiny is focused around five misfit young adults in New Orleans who are cursed/blessed with supernatural powers. The controller of Air, Juno, is a smartass alcoholic with anger issues who has a rap sheet ten miles long, is wanted by the police and the Cajun mafia, and can't seem to keep her nose out of trouble.

Terra
Terra follows a group of characters who band together to stop a devastating interplanetary war.

Zukahnaut
After years of hiding on Earth a lonely alien finally reveals himself. Can Zukah fight his own nature to redeem a wasted life?

Ianua
A young man named Janus lies at the center of web of fate that connects them all. His encounter with a unbound demon will bring about a series of trials, dangers and magic that has not been seen in centuries.

Today's page but without Zeke blocking the middle panel hahaha.