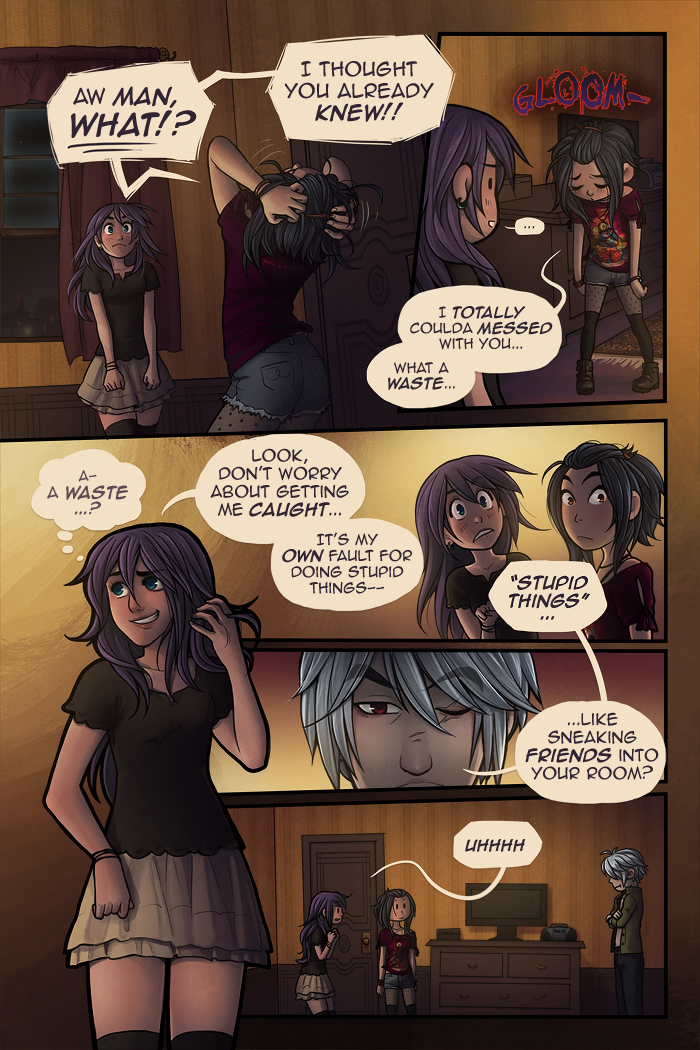 goddammit arliss, you gone and done it again

i'm so tired of being sick omgggggggg

anyway remember how i said that last chapter changed a lot? basically this whole conversation and werewolf discovery happened in the old version in the previous chapter, while arlie was in wolf form and the entire 'oh shit i got caught doing bad things' didn't even happen [i didn't really like that route tho...]

actually i will put this into the vote bait, explaining it isn't as good as seeing it, so go look at it there. xD;

ALSO ALSO ALSO
I did a pairing poll!
if you didn't already vote GO FOR IT or you can just look at the current results if you already voted.

i can see who you guys like tho...I GOT SOME PRESSURE ON ME NOW XD

SPIDER FOREST COMIC OF THE WEEK
This week is Damsels Don't Wear Glasses!

Life's no cake walk in Persephone for some, but Lave Faraday has it worse than most. In a city where the undead are part of the night life, Lave is expected to make sure the balance between the living and the technically deceased stays in check; or do time in jail for past crimes. But when you have mafia vampires, necromancer frat boys, and zombie booze drinkers prowling the streets, one can't help but feel like a glorified paranormal janitor.

Yet somehow being underpaid and living in a shoe box apartment is the least of Lave's problems when she finds herself protecting a young boy from a sinister force, and making enemies in all the right places.

i love this goddamn comic. the art is super clean and fun and lave is such a badass. i want to have her asskickin' babies all over the place, you don't even know. GO READ IT

preview of the next page & bonus: alternate ending for chapter 8 featuring arlie-wolf being a goof.