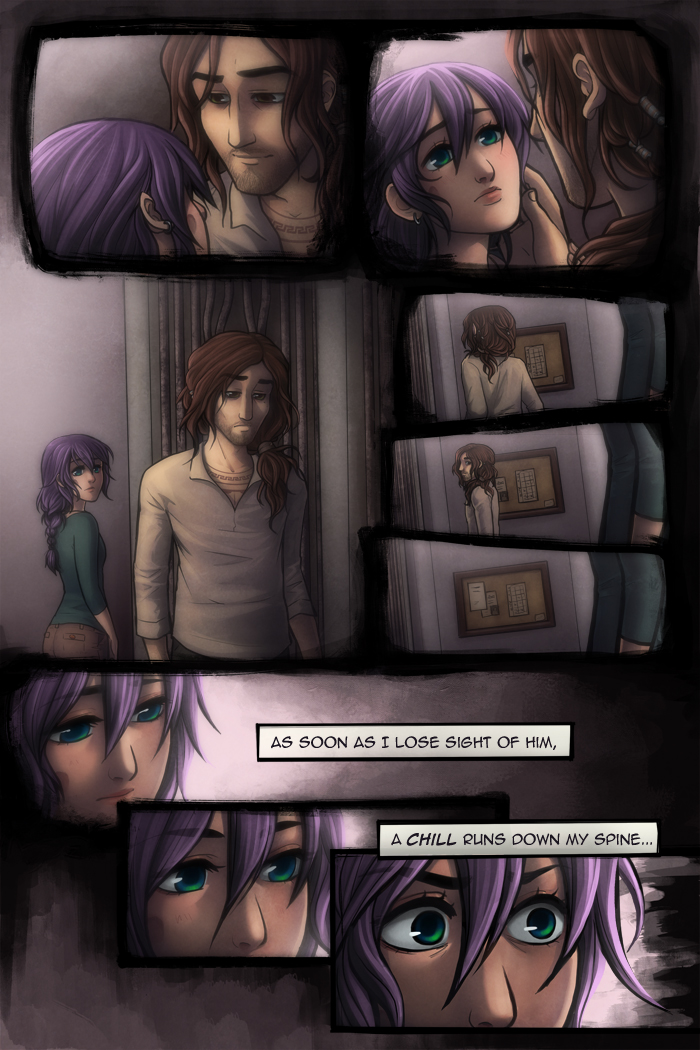 Y'all have no idea how glad I am to be done with that scene. I MISS MY EASY TO WORK WITH PANELING.

I am not sure yet but I might still have a week off after this chapter to help rebuild a buffer, at least in my thumbnail sketches...have 5-10 sketches ahead of the update helps -- especially in cases like this one, where I changed the entire ending to chapter 8, which scrapped off literally my entire sketch buffer lol. BUT YEA I will keep you posted about that on Twitter/FB, as always.


SPIDER FOREST COMIC OF THE WEEK
This week is dream*scar.

It's kind of a long-winded slowly updated urban fantasy by Hch--... OH WAIT THAT'S ME.

So since that would be super self serving, I'd like to point out some of the comics on my links page!

Ironclad Man follows a woman named Luon as she tries to track down, well, the Ironclad Man, who has apparently done some awful shit and she gon' get'm for it. This comic is by my buddy Matt. He is sort of my editor/reviewer, helps me when I am stuck on shit and is my prime idea-bouncer-offer guy. You guys should all go bug him to update more often, cos goddammit I hate waiting for updates on this one XD I'm so hopelessly addicted to it haha

Bedlam Genesis is a rather dark story about a group of people who are at the mercy of their own destinies. This comic manages to be both adorably heartwarming and ridiculously heartbreaking. It's by my buddy Kat and she's jus started the story proper with colour omg pretty pretty. 8D [vol 1 starts the colour -- the b/w stuff was a prelude to the main story] Mildly NSFW tho, due to the awesomeIMEAN horrible violence and blood etc etc. This is my other hopeless addiction. I lose my shit every week over this one.

The Defector is about a guy and his buddy who get drawn into another world and thrown into it's war. This story is still super new so THAT PREMISE HAS YET TO HAPPEN but I trust Hilary's description XD The art in this is really nice and the characters are super loveable :'D

Ahhh Feywinds. XD I feel like if you aren't reading this then you probably haven't been looking that hard for awesome webcomics. This one's a fantasy comic with super comedic infusions. If you've seen the old anime The Slayers, then you kind of understand the tone [comedy but with epic serious times thrown in]. I don't really know what to say about the plot of this other than you just have to read it for yourself. It's longform [just like everything else i read lol] and I'm afraid I'd spoil it if I said anything.


OK I THINK THAT IS GOOD FOR NOW. I wanted to list others from my links page but I don't wanna spam you guys too much, so you can always check out the links section for more of my faves haha. [speaking of i need to update that section again...i keep adding more comics to my reading list :C]

Mild NSFW warning~ Cheesecakey pic of Arianna. Was trying to come up with chapter covers and ended up doodling this aha. I hope to one day finish it... NSFW warning is due to the nudity but nothing is really showing/detailed [i drew this intending to cloth her but never figured out what to put her in]