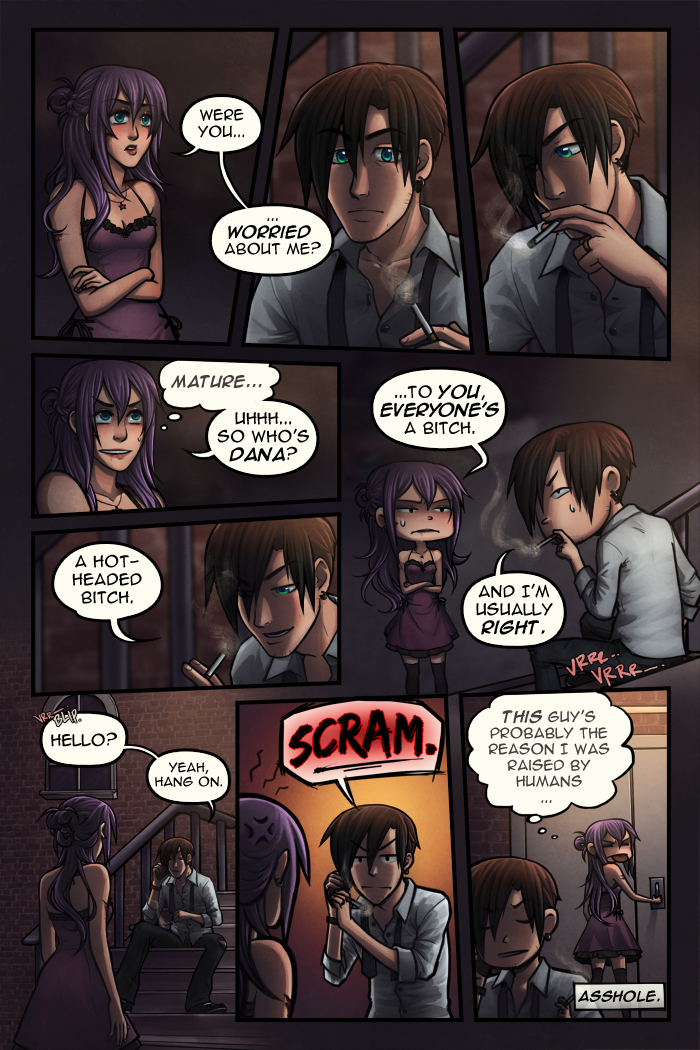 I think Vix is still bitter about being called a bitch by her own papa :'D...

Annnnd hiatus time. It only seems right to leave things off with some classic Lysandering. :'D

For those of you just tuning in, or who don't read the posts down here and are wondering why an update was missed, d*s is going on hiatus so that I can have a baby 8D As this is my first child, I am not entirely sure when the hiatus will be over. It could be anywhere from 3~6 months to even longer. I don't really know! But I do plan to post extra artwork of my own, fanarts, and maybe some previews or games or something during the hiatus, mostly here, but also on the d*s facebook and twitter.

I've already done several pages for the print of Vol 1, too, by the way! As well as picked at a few poster artworks that you probably saw wips for in old vote incentives and what not. I'm pretty excited about that!

If you guys have any requests for artwork you'd like to see in the hiatus, lemme know! I'm always open for prompts xD

Hmm. I guess I will try to keep you guys updated [prob via twitter] on how I am doing with the baby situation, if there's any interest in that lol.

And one final note, I wanna thank you guys for being really awesome. Like, seriously. Even though I'm slow [one update a week? it's horrible! it's unforgivable!], you guys put up with me :) I know this hiatus is gonna suck, no matter what, but I hope you guys continue to be as patient as ever over it :> Like I said, I'll be picking it up again ASAP. I have 0 plans to stop. I mean, hell, I want my daughter to be able to read this story one day, so I can't very well leave it unfinished! :)

Anyway, not really sure how to end this, so umm... well, see ya soon, I guess!? LOL. If you wanna keep in touch with me, or just wanna keep up to date with the extras/news about the hiatus, I'll still be around online a bit [esp up til the birth], sooo --


How to keep in touch!!
-- facebook [i'm most active/responsive on here]
-- twitter
-- deviantart
-- email [mind you, i will reply via my gmail account cos this addy doesn't wanna work both ways lol]


As for the Spider Forest comic of the week, amusingly enough, this is actually the last one on the list! This week features Malaak: Angel of Peace!!

As endless war rages in Lebanon, a mysterious child is found in a cedar forest. Malaak grows up to be faced with a double challenge: to come into her powers and to battle war itself -- a war in which the supernatural seems to have a hand...

If you remember after chapter 6, I posted all the old chapter doodles from the rough draft written version of d*s next to their comic counterparts for all of volume 1. I figured I'd do that again here for chapter 7! If you missed the vol 1 doodles, you can view them over here on my deviantart page...