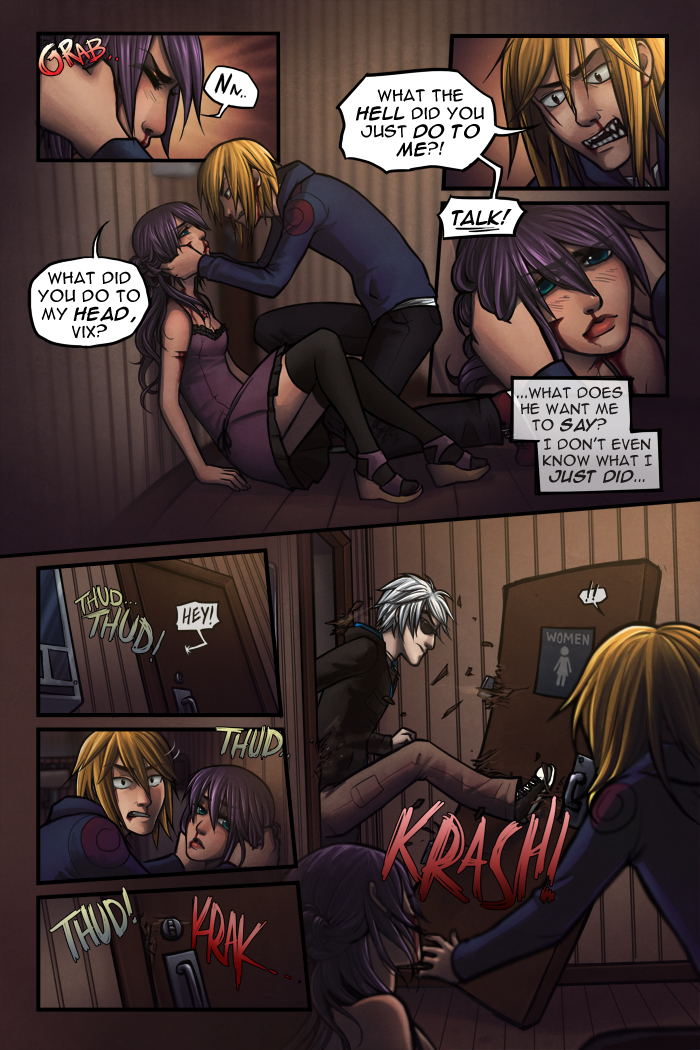 So that door busty part wasn't in the original script... I was convinced by my buddy Matt to include it. Glad I did, waaay fun to draw. XD I will say now that this page, and the next two at the very least, took me AGES TO STORYBOARD. I have said many times I am awful with action. I might draw it alright once I know what I am doing, but I GET STUCK SO BADLY. @[email protected] Seriously, a million thanks to Matt for his advice.

IN OTHER NEWS:
AWESOME FANART GUYS :D It's Vix and her dream twin [aptly nicknamed 'Twix' by one of the fans on Facebook LOL <[email protected] for that name XD] based on page 29 :D GO OOGLE IT, for serious. And feel free to check out the rest of the artwork while you are at it :)

Since this week in the Spider Forest Promo is my own comic, I thought I'd plug a few of my buddies who recently started webcomics [but aren't in SF]!

[btw excuse the banners, i threw them together based on panels in the comics or art they had avail lol]


First up is Neverend!

She actually doesn't have any pages up yet, she was gonna start posting I think this weekend, but I really love her art style [kidna disney-esque but unique?]. It seems like it's gonna be a drama/slice of life type story maybe involving love triangles and what not ;) I am gonna assume there will probably be nudity in it [considering her normal artwork] and maybe some cussing? Not sure. But bookmark it :D!


Next is The Ironclad Man!

This one is just starting out, but it's by my good buddy Matt, who has sort of been a life saver for me on d*s by giving me lots of good storyboarding advise [esp in these coming pages]. He was a little apprehensive about me linking to his comic already, but I assured him I'd warn you guys it's only got a couple pages up atm. He's been really tight lipped about the plot of this thing, even with me, but his about page hints at it with this line:
"A young woman pursues a dangerous man across a world at war."
But yeah, his storylines and world building have always been ridiculously good, so I'd bookmark this one too, maybe leave a message to tell him to keep it up, and check back later [i will likely link it again later when he has more pages up too :)].


Next up, we have The Defector!

This one is by my art buddy Hillary. She has actually written a small blurb about it, which I will copy/paste here:
"Ronan Atherton and his slacker friend Franz encounter a girl who comes from another dimension and subsequently ropes them into playing a huge part in her world's revolution. There's action! There's intrigue! There are magic weapons that represent people's individual souls! It's all you ever wanted!"
LOL. Anyway, her art style is something I have long enviiiedddd. The EXPRESSIONS, holy crap. /worship. Anyway, GO READ IT. Very good :)

Last but not least, Bedlam Genesis!

This one is by my buddy, Kat :D I have probably linked it before XD [it's also linked on my links page, as to why the banner is different..it's actually an official banner 8D;] Anyway, the story is about two girls who end up with awesome powers [there is a reason lol] and are pretty much destined to destroy each other; people are fickle tho and don't always end up doing as they are expected... So far, the comic is focusing on the backstory [re:childhood] of each of the main characters... it's a cute comic and yet also extremely disturbing, because of the shit these poor kids are going thru. There is gore, despite the cute style!! So read with caution :)


That's everyone! I hope! LOL.

In other news, officially at the halfway point in my pregnancy. Where the hell did the months go already??

Another sneak peek for next week, along with the sketch for this page [with my stupid caption i added when i was showing it to matt for advice lol]. If you don't understand the reference, I am sorry, but just realize it is related to MST3k / Rifftrax.