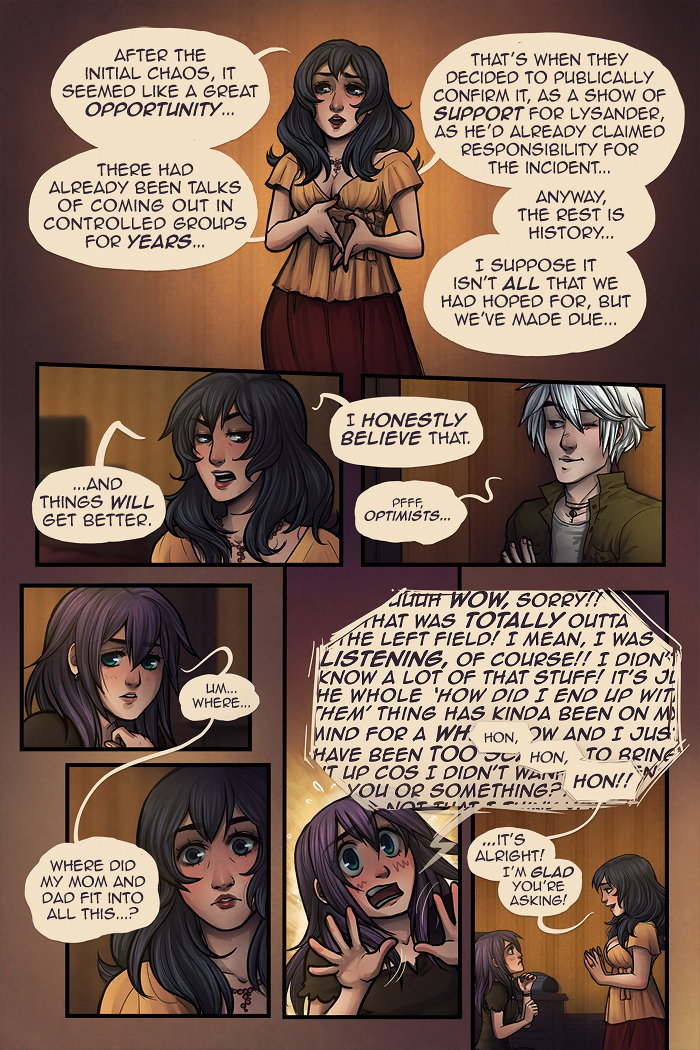 So as promised, since I cut a bunch of Ari's history lesson here to save time, I'll expand on it all a bit here! A lot of this is thanks to my buddy Matt, btw. He's my idea bouncer offer and is really good at helping me refine my ideas [or straight up suggest stuff to me cos he a boss like that]. EVERYONE NEEDS A BOUNCING BUDDY.

ANYWAY. As indicated on the last page, that rival group was pretty much out to screw with Lysander's. To stop a coming attack, Lysander cleared his kin from the area and had Ophelia do her thing. Basically any vampires that were exposed to the light were dust. And of course everyone saw it; even people not close enough to see the actual firebird [or too close to really understand what shape it was] still saw the sky light up like it was daytime for a few seconds.

The story pretty much blew up overnight. Not just the phoenix thing, but that people witnessed vampires literally being vaporized right next to them. Lysander quickly claimed responsibility, hoping to avoid a witch hunt, and of course the assumption was that, oh shit, this was a terrorist attack. Was it some kind of bomb? Why did it only kill some and not others? Etc etc. About this point is when a group of unhuman leaders met and decided to back him up, which is what lead to The Reveal, which included a few chosen unhuman leaders; Lysander [tho not one of the vampire leaders at the time] from the Vampires, Sung-uk [arlie's dad] from the Weres, Galliot from the Unicorns, and Usadi from the Dragons.

As for Lysander basically killing a bunch of 'people', it ended up being a huge debate about whether killing Vampires even counts as murder since they are technically already dead. He ended up getting off with little more than a Public Disturbance charge, because LOOPHOLES YO. I mean how you gonna charge someone when they're not even recognized as literally anything at all. 8D

Anyway, that's most of what I had for this... it's not like super important to know really, I guess. But it's fun to flesh out things like this still xD There will be more about this kinda topic later actually in the comic tho [mostly the fallout stuff and the current state of things :P] so ummm...yep!


In other news...my wrist is hanging in there. Still aches sometimes, but not as bad as it has in the past. I'm taking it really easy as much as I can, using my left hand to do all the menial shit around the house. I still can't draw or colour as neatly/detailed as I am used to, so's not to stress things... I'm really grateful you guys haven't complained! Maybe it's not obvious to you but the quality drop for me is kinda sad. Whatever tho, as long as I'm getting my story out, it's all good.

I've been considering more seriously working on the novel version lately tho... as a fallback if my wrist gets bad and needs a few months rest... I really don't want it to come to that, but it would be fun to redo the novel more like the comic, but with more detail than the comic and some revisions to the earlier chapters cos...idk some of that is just awkward to look back on now xD

I got tired of looking at Rylie's butt [somehow] so here's a few thigns I did this week aside from the comic...one is a suuuper quick art for a friend who was feeling down and the other is a little info on how all my characters talk. This is a a veeery long picture so enjoy that scrollbar 8D it also shows charas we haven't met yet [tho not all of them cos omg my cast be huge]