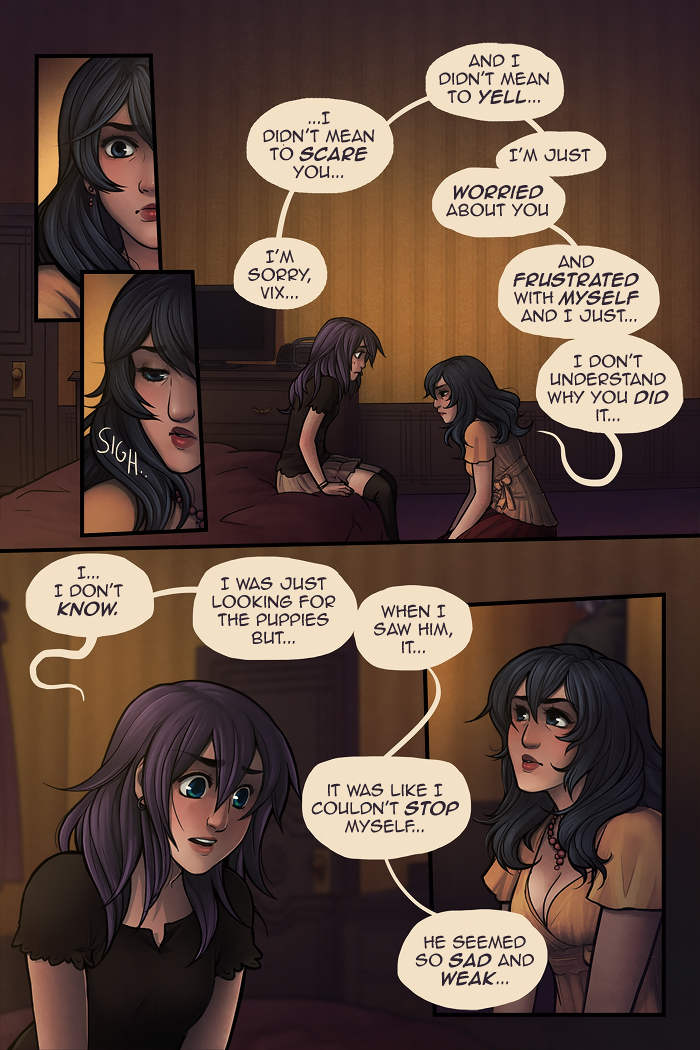 Btw I really enjoyed the response to the last page~ There was a lot of fun discussion and dfhsfjshfjd it's just super fun to read and I love you guys. Like you guys look forward to page, but I look forward to comment threads like that! So thanks, guys!!

Iiiiiin other news, I spent pretty much all week working on the script for this chapter cos I wasn't all that happy with it [and there were some inconsistencies i noticed too, erk]... it's at a place now where I think it's more interesting/fun... at least I hope haha. I mean if I am unhappy with it, I know you guys would be, so hopefully now it'll...be less awful or something I DON'T KNOW.

Also Josh helped me name the city d*s takes place in! Since I know California pretty well, I figured it should be in Cali...Like, write what you know and all that.

Anyway, I spent all damn week googling [City Name Idea], CA to make sure the city didn't already exist, and FUCK YOU CALIFORNIA FOR BEING SO BIG and already having every city I could think of. So I began to think of FAKE names. My mind kept going to Auberdine from WoW, and I was like, "Hey, maybe Amberdine... or Aberdine! That's cool sounding!"

So I googled Aberdine, CA

and google just looked at me and went, "did you mean Aberdeen, CA?"

In the end Josh suggested Tunston, and I added City, sooo...Tunston City. IT AIN'T PRETTY BUT WHATEVER, IT WORKS, I'M DONE WITH IT, ENJOY. LMFAO.


SPIDER FOREST COMIC OF THE WEEK
This week is The Only Half Saga!

TOHS is set in a post apocalyptic world and follows Cabal, a sexy ass Native American dhampir, as he seeks revenge on his vampire father... [at least that is the initial premise!]

Denise has asked that I link to her current story arc, which can work as a stand alone; it's about another dhampir named Garrett who has betrayed his own kind and now hunts them down as his job. But then he meets Cabal's very pretty daughter and it can only lead to trouble... :'D

This story is very NSFW so read with caution! And if you enjoy this story I highly suggest reading the entire thing, and maybe her other comic as well~ I've been reading both comics for a long time now and can super vouch for themmm! They are soo addictive :C!! Please give them a chance!

The next page in full [but in sketch form]! Very canon, not a joke at all. Enjoy.