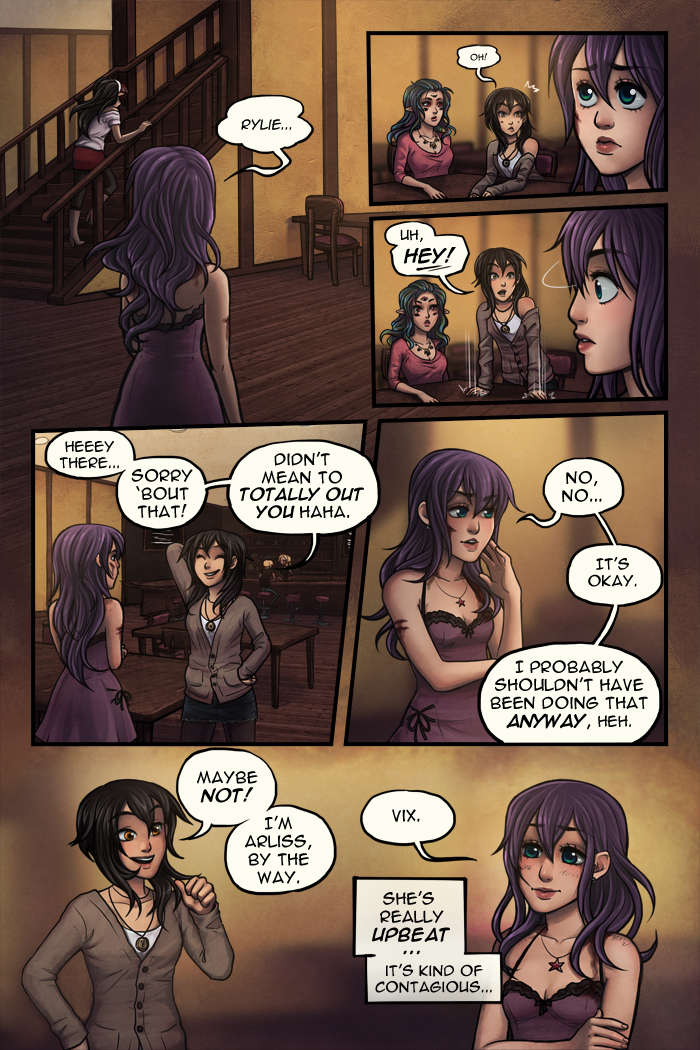 So now we meet officially Arliss! Hurrah, Arlie! I feel really rusty with drawing her. It's been a pretty long time. Also, I'm trying to make her a little more asiany...I didn't used to really bother! But Asians, man...hard to draw! I'm prolly gonna keep tweaking her over time. I've already tried to set her up with some of the Korean-ish features I notice a lot in KDrama, like her brows being thicker in the middle [i feel like a lot of the korean actresses have this eyebrow style, anyway], trying to make her ears stick out a tad more than I normally would [something else i noticed, which is frickin adorable imo], and her skin colouring is hopefully a little more yellow-ish than Vix's... I don't think she wears makeup much tho, so I tried to keep her eye lashes and lips reasonably natural looking lol.

I'll get the hang of her eventually...

This page took a lot of rescuing...lots of bad proportions and such [arlie had a case of huge head in every. single. panel.] and just general fuckery. But I am ok with it now so...yeah!

In other news, I finished this chapter last night... then when I opened my script to read it over, I realized I NEVER FINISHED THE SCRIPT FOR THE NEXT CHAPTER. /screaming Like I mean I have the novel version, but I've been cutting out the fat and reworking things, changing scenes, etc etc... so currently I don't have the next chapter totally revamped! I sat and wrote the script from chapter 1 to where it is now and compleeeetely forgot I was coming up on the end of my revisions already! Frick! Thankfully writing is a lot faster than drawing, so I will be getting that fixed soon ahha. But fair warning, if I don't get it done fast enough [cos hey, i still have to thumbnail the chapter out a bit before i start actually working on pages], there might be a break between this and the next chapter. Crossing my fingers for a better outcome tho...

Pic I did about a month or so ago of Vix being all springy! I scanned and fixed it up a little bit, so ..yeah, enjoy, and happy belated spring time!